I’m a coppicer, hedge layer and garden designer (won awards!) and until recently, was based on the Suffolk/Norfolk border, trading under the name ‘Greensmith and Hedgery’. I put forward the idea of a Coppicer’s Garden to the East Anglian Coppice Network a year or two ago but we didn’t manage to make anything of it. I’ve been ill recently and moved, temporarily, away from East Anglia but am still keen to explore the possibilities of these ideas and propose them as something that NCFed could take on collectively. It would be a major project requiring major sponsorship. As a national body we could do it, but it would need us to be committed to take it on and make it happen. Have a read and let us know what you think.The “Coppicer’s Garden” is intended as an exhibit in the Artisan Garden category for one of the Royal Horticultural Society (RHS) Flower Shows – Chelsea or Hampton Court Palace perhaps.  It has number of aims.  Among these are …

This design is open at the front. The initial view is dominated by a structure built from roundwood and hurdles that supports a sail type roof. This will be open and offer views through a wooden colonnade into the garden. It is hoped that this will be accessible to visitors, though show policy may impose constraints on this. Simple bench seating will be located beneath the sail roof. It is suggested that the column be made in a manner suggestive of ancient/classical buildings. 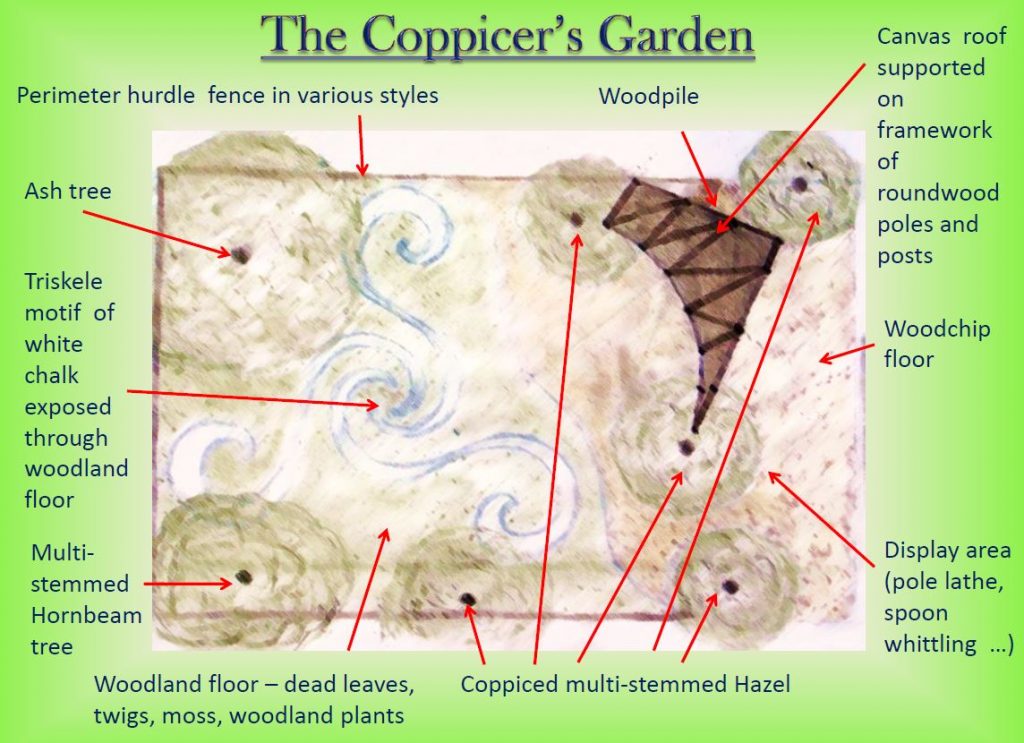 Design for a Coppicer’s Garden by John Esling

The intent is to move away from the perception of the “rustic” nature of coppice products and introduce the notion of creating structures using elements from other design languages with less sense of contingency and more “sophistication”. Carving a row of columns in the building together with numerous roundwood elements is also intended to communicate the evolution of living tree into a crafted structure. A spectrum from nature to nurture with human engagement forming structure.  I have, half seriously, characterised this style as “Rusticklassical”.

The structure, except for the columns, is very simple for practical reasons and to encourage a focus through, as well as on it, to the coppice beyond.  The colonnade also forms a perimeter around a kind of temenos (classical religious enclosure). The intent is to communicate a sense of the coppice as a special place.

The perimeter of the garden and elements in the structure, will be formed from hazel and willow fencing. This will be in different styles, showcasing a range of skills, uses and designs. Although these will differ, the overall design of the space will maintain a collective design unity.

In the area adjacent to the structure is an active demonstration area. This could accommodate pole lathing, whittling, hurdle making or other woodland crafts. I feel that there needs to be an element of performance in the garden although this may be an issue for the RHS. It may be possible to take orders for products and work during the show though the RHS does not permit direct selling from show gardens.

My experience is that this project should be part of an awareness raising effort whose success may, in future, be measurable in terms of income and activity.

Footnote
Since composing the above I have had further thoughts.

All this is up for discussion. All suggestions and commitments to help are welcome.

Please tell us what you think – news@ncfed.org.uk