(View / download this article as a pdf by clicking here)

On 21st February 2020, the Government confirmed its plans relating to domestic burning as part of its new Clean Air Strategy for England (Jan 2019). This strategy covers many types and sources of air pollution including from transport, farming, industry and, most relevant here, from the home. This article aims to summarise the main points of the strategy in relation to firewood. It is not intended to either condemn or condone the proposed legislation or the research behind it. The Clean Air Strategy also includes plans for other solid fuels as well as for wood-burning stoves and smoke control areas.

Please note: air quality is a devolved issue and so this information applies to England only. The Welsh Government is currently consulting on proposals before producing its own clean air strategy. The consultation runs until the 10th March and can be found here.

The UK has set targets to cut emissions by 2020 and 2030 with the main goal being ‘to reduce the harm to human health from air pollution by half.’ The Government believes that air quality is the ‘largest environmental health risk in the UK’ and that ‘air pollution has a direct impact on the natural environment’.

The Government claims its research has shown that domestic burning of solid fuels now makes up the single largest contributor to our national particulate matter (PM) emissions at 38% (34% from wood). PM consists of tiny particles suspended in the air that are small enough to enter the lungs and blood and be transported around the body. Domestic burning can produce PM2.5, the finest type of particulate matter, with particles 200 times smaller than a grain of sand. The Government’s aim is to reduce emissions of PM2.5 against the 2005 baseline by 30% by 2020, and 46% by 2030.

The 38% figure being used by the Government has been called into question by some scientists (see the article from Woodsure here) and a Government report states that ‘the uncertainty range in emission estimates could be an order of magnitude’, i.e. out by an order of 10 (see pg 29 of this report). 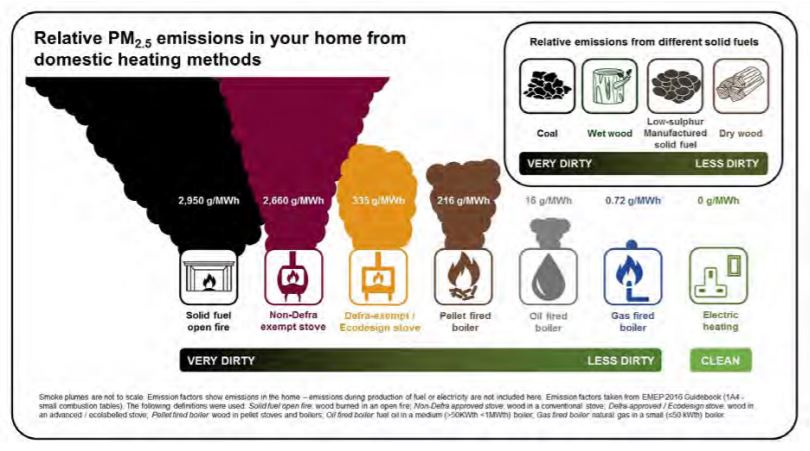 A consultation was carried out from August to October 2018 to gather opinions on how the future sale of firewood and coal should be changed and regulated. A summary of the responses received and of the Government response can be found here.

Following this consultation, the Government has now released its Clean Air Strategy.

The main points in the Clean Air Strategy that relate to firewood are: